A golden treasure in a jar. Honey benefits, history and more.

Honey is a sweet, viscous food substance made by honey bees and some related insects. Bees produce honey from the sugary secretions of plants (floral nectar) or from secretions of other insects (such as honeydew), by regurgitation, enzymatic activity, and water evaporation. Bees store honey in wax structures called honeycombs. The variety of honey produced by honey bees (the genus Apis) is the best-known, due to its worldwide commercial production and human consumption. Honey is collected from wild bee colonies, or from hives of domesticated bees, a practice known as beekeeping or apiculture. Most microorganisms do not grow in honey, so sealed honey does not spoil, even after thousands of years. Honey use and production have a long and varied history as an ancient activity. Several cave paintings in Cuevas de la Araña in Spain depict humans foraging for honey at least 8,000 years ago.

The nectar generally begins with a water content of 70 to 80%. Salivary enzymes and proteins from the bee's hypopharyngeal gland are added to the nectar to begin breaking down the sugars, raising the water content slightly. The forager bees then return to the hive, where they regurgitate and transfer nectar to the hive bees. The hive bees then use their honey stomachs to ingest and regurgitate the nectar, forming bubbles between their mandibles repeatedly until it is partially digested. The bubbles create a large surface area per volume and a portion of the water is removed through evaporation. Bee digestive enzymes hydrolyze sucrose to a mixture of glucose and fructose, and break down other starches and proteins, increasing the acidity. The bees work together as a group with the regurgitation and digestion for as long as 20 minutes, passing the nectar from one bee to the next, until the product reaches the honeycombs in storage quality. It is then placed in honeycomb cells and left unsealed while still high in water content (about 50 to 70%) and natural yeasts which, unchecked, would cause the sugars in the newly formed honey to ferment.

Possibly the world's oldest fermented beverage, dating from 9,000 years ago, mead ("honey wine") is the alcoholic product made by adding yeast to honey-water must and fermenting it for weeks or months.

How to distinguish good quality in honey:
Generally, honey is classified by the floral source of the nectar from which it was made. Honeys can be from specific types of flower nectars or can be blended after collection. The pollen in honey is traceable to floral source and therefore region of origin. The rheological and melissopalynological properties of honey can be used to identify the major plant nectar source used in its production.

Most commercially available honey is a blend of two or more honeys differing in floral source, color, flavor, density, or geographic origin.

High-quality honey can be distinguished by fragrance, taste, and consistency. Ripe, freshly collected, high-quality honey at 20 °C (68 °F) should flow from a knife in a straight stream, without breaking into separate drops. After falling down, the honey should form a bead. The honey, when poured, should form small, temporary layers that disappear fairly quickly, indicating high viscosity. If not, it indicates honey with excessive water content of over 20%, not suitable for long-term preservation.

In jars, fresh honey should appear as a pure, consistent fluid, and should not set in layers. Within a few weeks to a few months of extraction, many varieties of honey crystallize into a cream-colored solid. 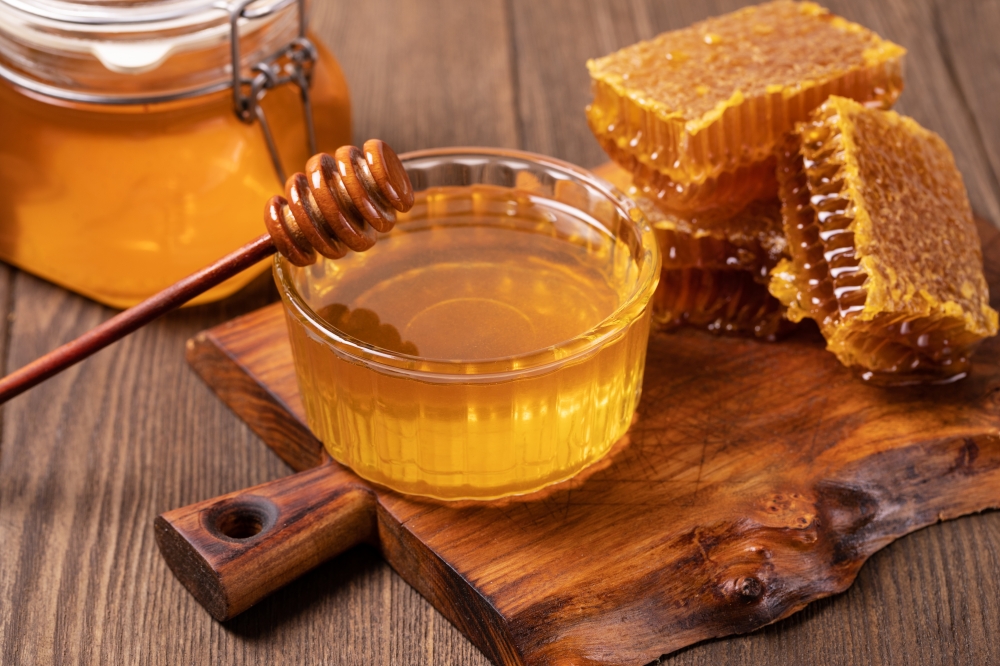 Honey collection is an ancient activity. A Mesolithic rock painting in a cave in Valencia, Spain, dating back at least 8,000 years, depicts two honey foragers collecting honey and honeycomb from a wild bees' nest.
In ancient Greece, honey was produced from the Archaic to the Hellenistic periods. In 594 BC beekeeping around Athens was so widespread that Solon passed a law about it: "He who sets up hives of bees must put them 300 feet [90 metres] away from those already installed by another". Greek archaeological excavations of pottery located ancient hives. According to Columella, Greek beekeepers of the Hellenistic period did not hesitate to move their hives over rather long distances to maximize production, taking advantage of the different vegetative cycles in different regions. In ancient Greek religion, the food of Zeus and the twelve Gods of Olympus was honey in the form of nectar and ambrosia.