Take a Greek taste through our new products. Dolmades, moussaka and many more, now on Greekseller.com 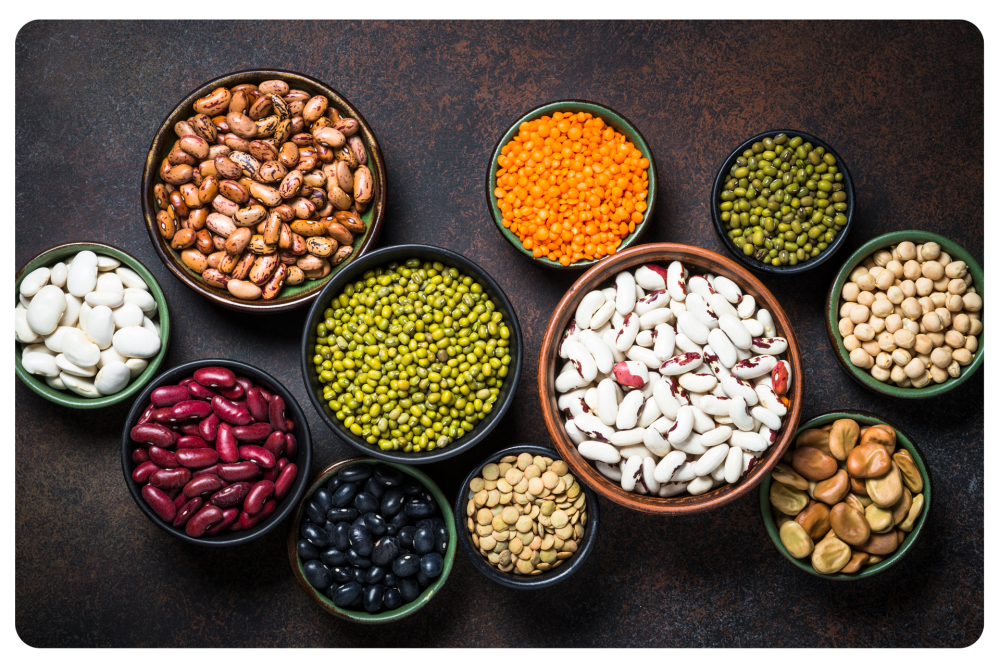 Legumes are a significant source of protein, dietary fiber, carbohydrates and dietary minerals. Preliminary studies in humans include the potential for regular consumption of legumes in a plant-based diet to reduce the prevalence or risk of developing metabolic syndrome. There is evidence that a portion of pulses (roughly one cup daily) in a diet may help lower blood pressure and reduce LDL cholesterol levels, though there is a concern about the quality of the supporting data. Beans are one of the longest-cultivated plants. Beans are a heliotropic plant, meaning that the leaves tilt throughout the day to face the sun. At night, they go into a folded "sleep" position.

Consuming beans adds significant amounts of fiber and soluble fiber to a diet, with one cup of cooked beans providing between nine and thirteen grams of fiber. Soluble fiber can help lower blood cholesterol. In fact, a Greek saying calls them “the meat for the poor”, because of the low cost and the variety of vitamins and high protein. 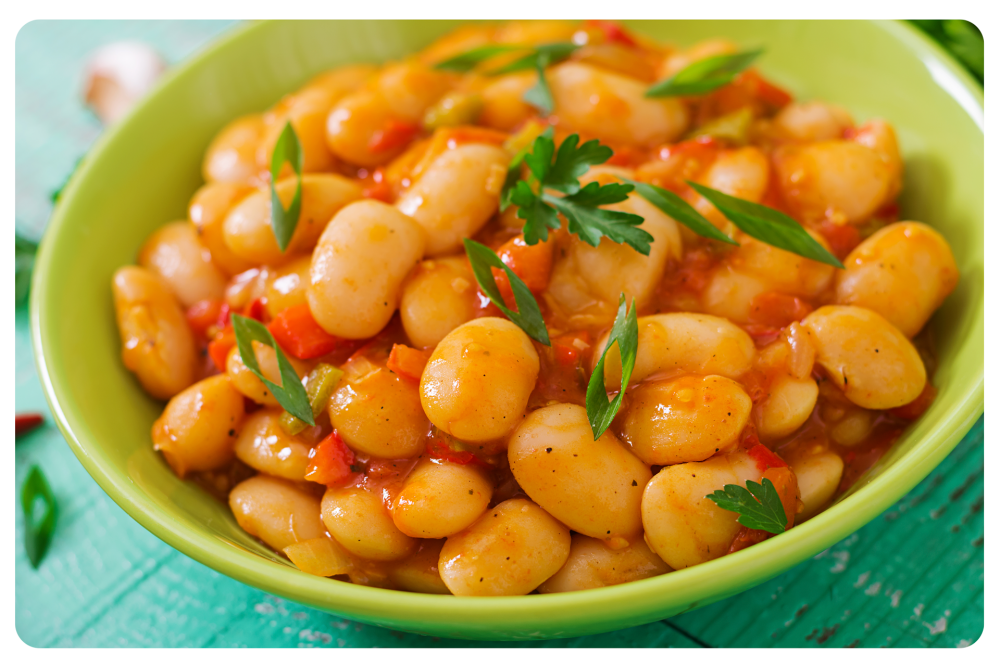 Gigandes plaki, also spelled gigantes or yigandes is a Greek dish known in English as giant baked beans. The name Gigantes comes from the Greek word for giants, hence giant beans. Gigandes plaki is a vegetarian meze dish that consists of large dried white beans (traditionally fasolia gigandes, a variety of the scarlet runner bean cooked in a tomato-based sauce. The beans are first soaked (often overnight), then boiled until tender and drained, and the rest of ingredients are added. The aromatics are sautéed to make a sofrito and mixed with the beans. Then the beans are baked until the top layer of the dish is browned. The dish may be served at room temperature or warm. Fasolada, fasoulada or sometimes fasolia, is a Greek, Mediterranean, and Cypriot soup of dry white beans, olive oil, and vegetables, sometimes called the "national food of the Greeks". Fasolada is made by simmering beans with tomatoes and other vegetables such as carrots, onion, parsley, celery, and bay leaf. Lima beans are sometimes used instead of white beans. Recipes vary considerably, often including meat. It is often enriched with olive oil either in the kitchen or on the table. 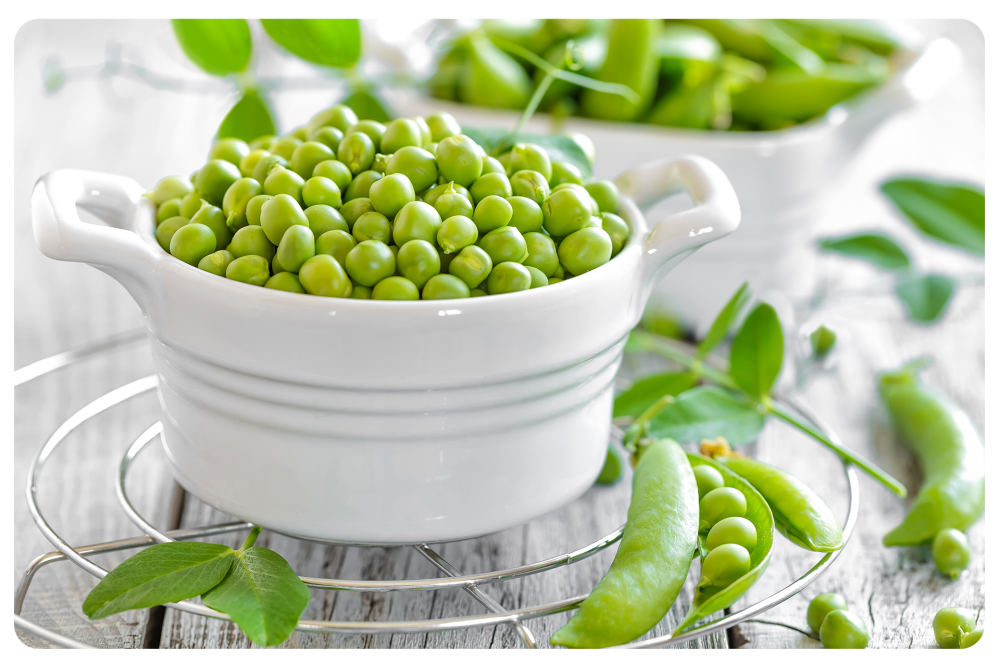 Peas are starchy, but high in fiber, protein, vitamin A, vitamin B6, vitamin C, vitamin K, phosphorus, magnesium, copper, iron, zinc and lutein. Ladera are a form of cooking and it means with olive oil, consist of vegetables, plain or stuffed, cooked in a tomato, onion, garlic, and olive oil sauce, and usually do not contain meat. Formerly, lemon juice was used when tomatoes were out of season. They may be stewed on the range-top or baked in the oven. Ladera can be served on their own, typically with feta cheese and bread, or with potatoes, bulgur, or pasta. They may also be served as a side dish to fish or meat. They are often served warm or at room temperature, and are popular in the summer. They are also commonly eaten as a fasting food. 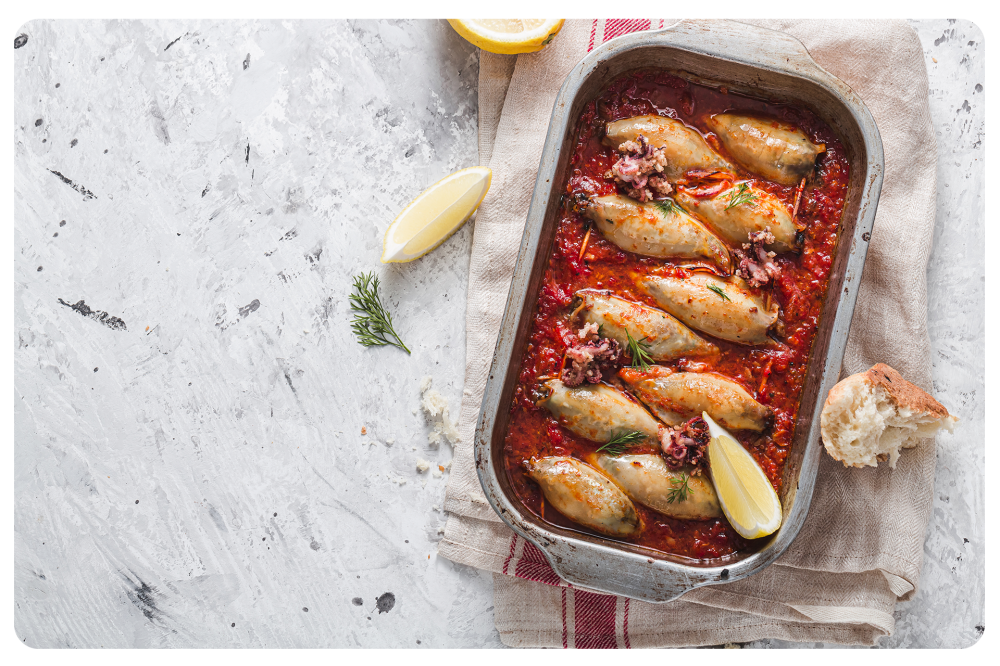 Squid is eaten in many cuisines; in English, the culinary name calamari is often used for squid dishes. The nutritional value of squid compares favorably with other fishes, having high content of protein and phosphorus with traces of calcium, thiamine and, riboflavin. 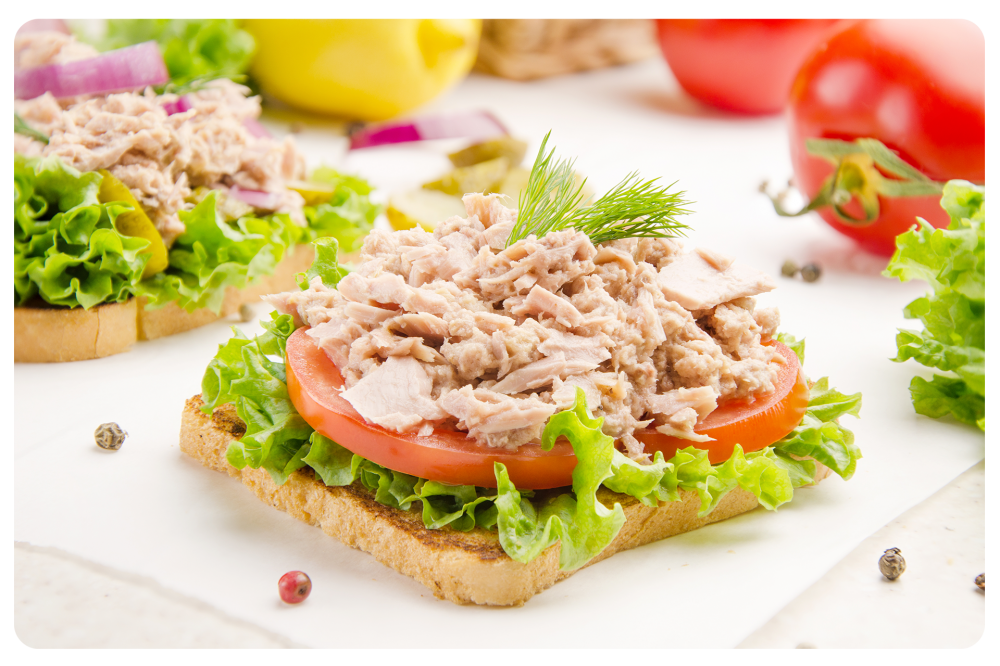 Canned tuna was first produced in Australia in 1903, and quickly became popular. Tuna is canned in edible oils, in brine, in water, and in various sauces. It is a rich source of phosphorus and vitamin D, and a moderate source of iron. The term "tuna" ultimately derives from Thunnus, the Middle Latin form of the Ancient Greek: (thýnnos), lit. 'tunny-fish' – which is in turn derived from (thýnō), "rush, dart along". 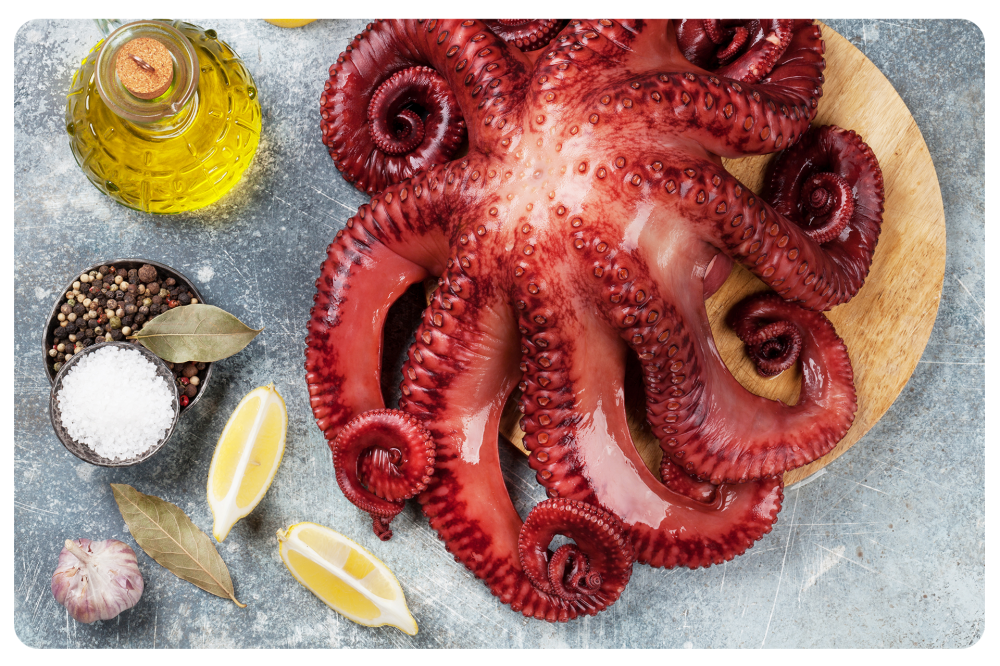 Octopus is usually prepared in Greek cuisine with classic Greek spices and seasonings, often including olive oil, garlic cloves, oregano, pepper, and lemon juice. On the whole, octopus is considered a superb meze, especially alongside ouzo. It is a source of vitamin B3, B12, potassium, phosphorus, and selenium. 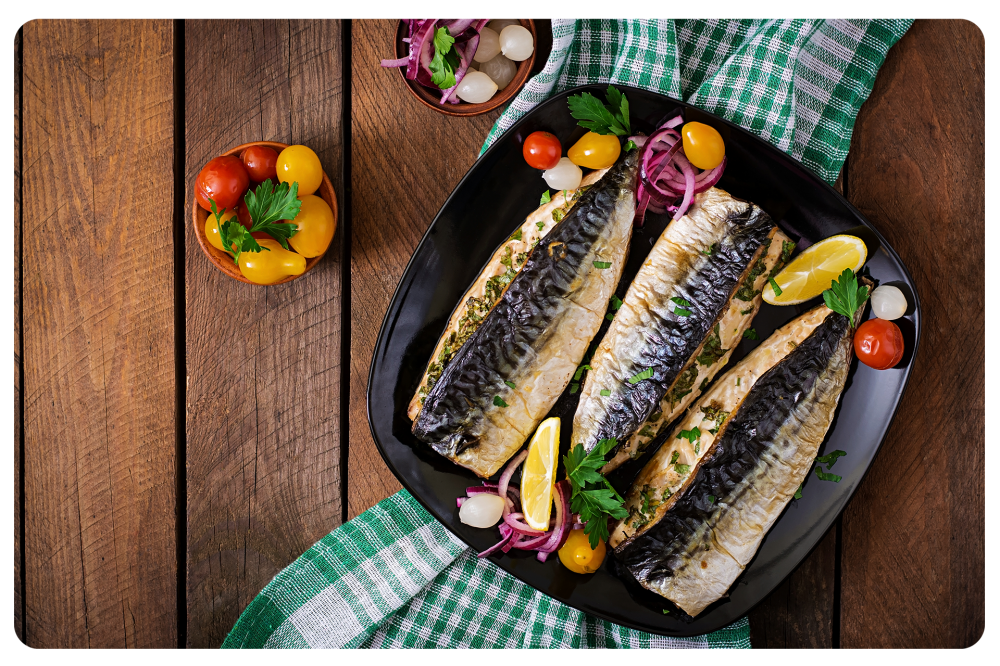 Mackerel is an important food fish that is consumed worldwide. As an oily fish, it is a rich source of omega-3 fatty acids. Mackerel preservation is not simple. Before the 19th-century development of canning and the widespread availability of refrigeration, salting and smoking were the principal preservation methods available. Historically in England, this fish was not preserved, but was consumed only in its fresh form. In France, mackerel was traditionally pickled with large amounts of salt, which allowed it to be sold widely across the country. 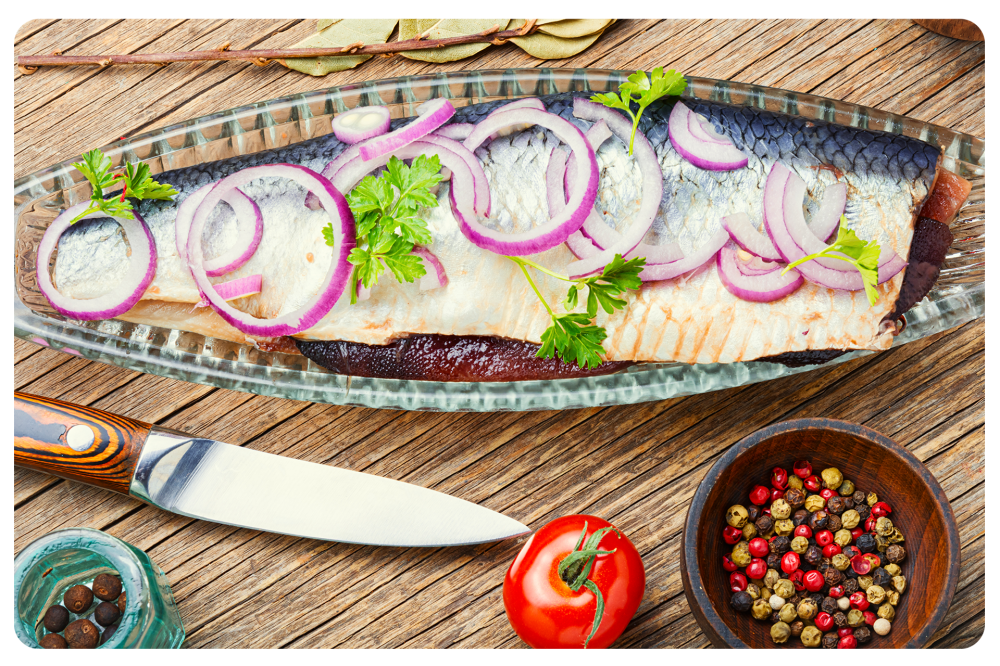 Herring is a fish known for its’ highly rich source of vitamin B12. It also has rich content of niacin, vitamin B6, vitamin D, and phosphorus. Raw herring contains moderate amounts of other B vitamins and zinc, and is an excellent food source of omega-3 fatty acids. 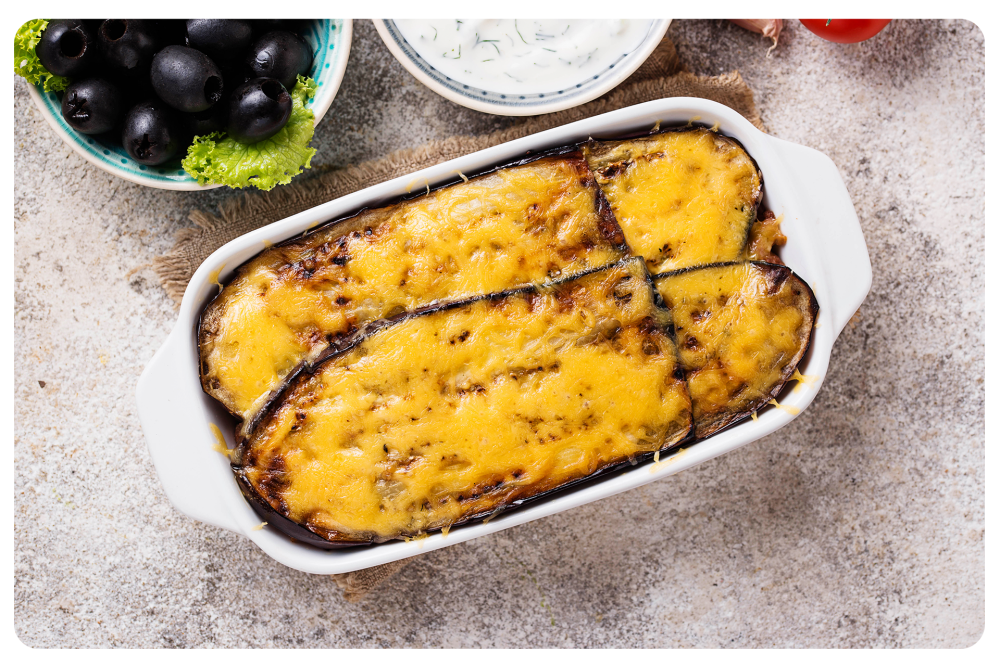 The most famous version of the dish today appeared in the 1920s with the publishing of Nikolaos Tselementes' culinary book in Greece. Many versions have a top layer made of milk-based sauce thickened with egg (custard) or flour (béchamel sauce). In Greece, the dish is layered and typically served hot. Most versions are based primarily on sautéed aubergine (eggplant) and tomato, usually with minced meat, mostly lamb.

However, the Greek version includes layers of meat and eggplant topped with a Béchamel ("white") sauce, and baked. It seems likely that the Greek moussaka has Arab origins and is related to the Levantine musakhkhan, with the word moussaka derived from this Arab word.

Moussaka is usually served warm, not piping hot; if cut hot out of the oven, moussaka squares tend to slide apart and consequently the dish needs some resting time to firm up before serving. Reheating, however, does not present the same problem. 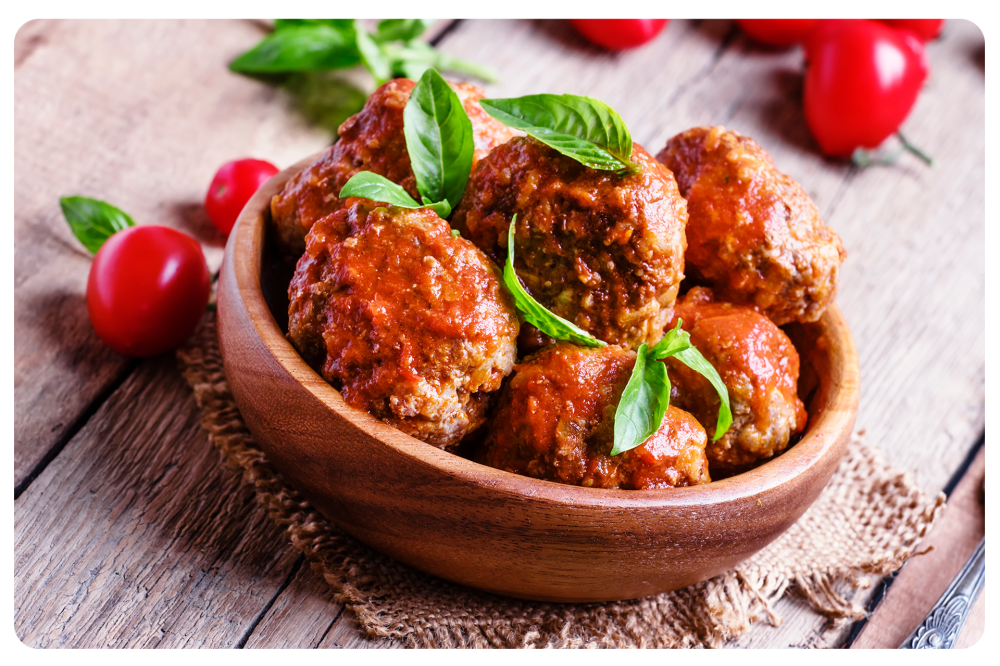 In Greek, Cypriot, and Balkan cuisines keftedes may consist of pork, beef, lamb, or a mixture of the three. In Greece and Cyprus there are also vegetarian versions known as hortokeftedes, often eaten during fasting periods such as Lent. In Greece and Cyprus keftedes are usually cooked by being fried and eaten with tzatziki or yogurt. The name is also given to fried vegetarian fritters, such as kolokytho-keftedes (courgette fritters), horto-keftedes (wild green fritters). 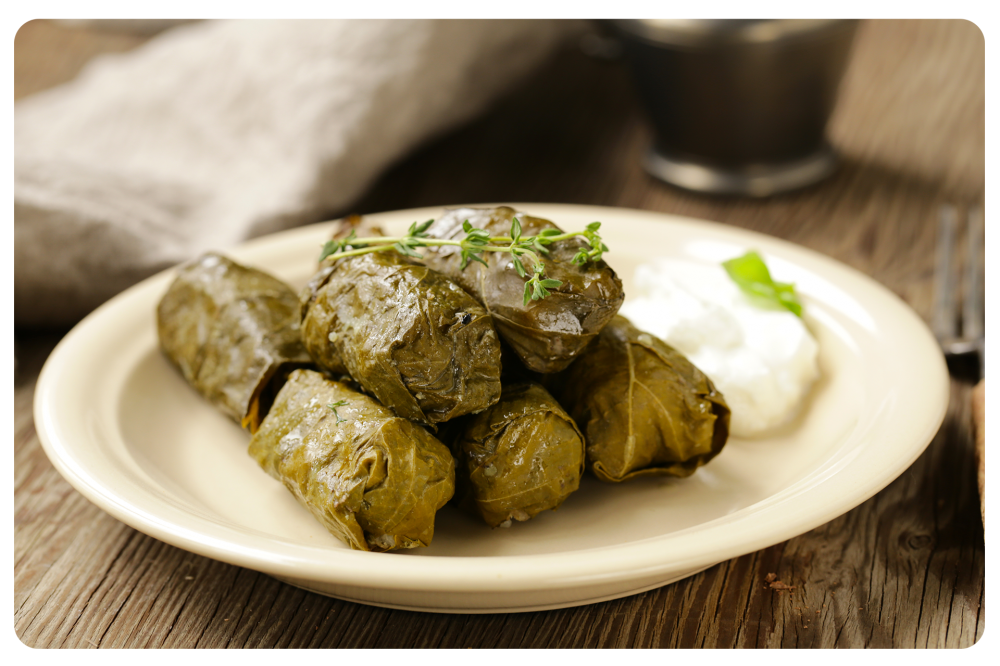 Dolma have been a part of Middle Eastern cuisine for centuries. Though the word dolma itself most likely has its roots in the cuisine of the Ottoman Topkapı Palace, stuffed vegetables are attested to in pre-Ottoman Arabic cookbooks that include recipes like eggplants stuffed with meat. Likewise, in Ancient Greece, fig leaf stuffed with sweetened cheese was called thrion. The origins of stuffed vine leaves are unknown. They are known as dolme in Iran, dolmades in Greece, tolma in Armenia, and yerba in Syria.